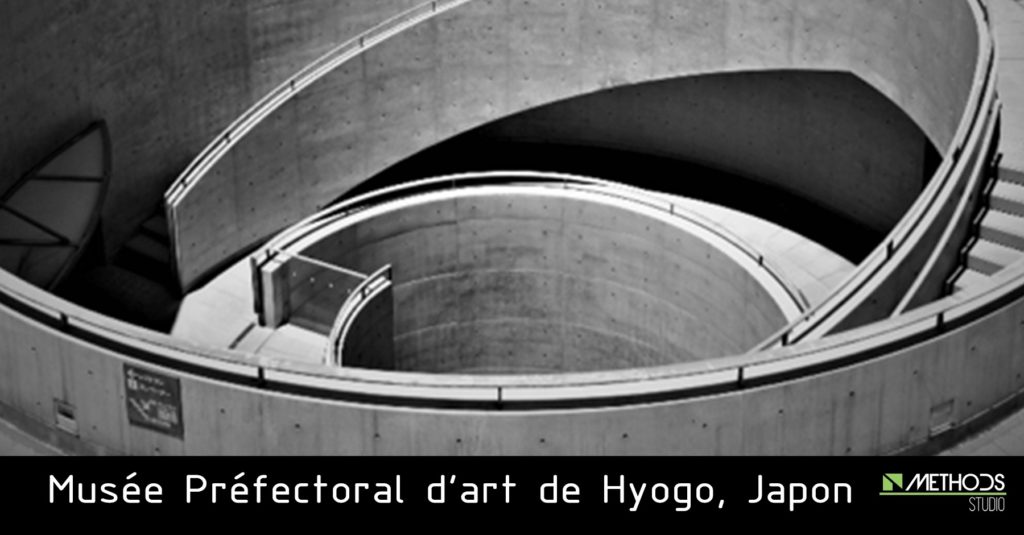 Tadao Ando: “Space only comes to life when people enter it. The essential role of architecture, the role of space, within architecture, consists in promoting interaction between people, (…) and above all in stimulating reflection within people." 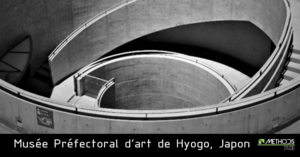 When we talk about the main contemporary architects, we often talk about stars in the architectural profession. Throughout their careers, each of them has built a philosophy, a stroke of the pen, an identity. Tadao Ando is one of them: both a philosopher and an architect.

Throughout his career he has created spaces where man can refocus on their emotions or their ideas. These projects, filled with spirituality, are very often linked to culture, religion, or private commissions for homes. Over his career he has become one of the references of spiritual architecture in the later 20th and early 21st century.

The Spiritual Havens of the Architect Tadao Ando

Looking at Tadao Ando’s creation,we note that religion in the broad sense of the term holds an important place. He has created spaces filled with spirituality that are able to reach all those entering them in a universal way. 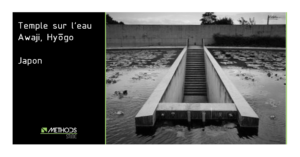 Tadao Ando reinvented building traditions in Japanese Buddhist temples.He preferred concrete. found in many of his works, to traditional wood. This change may seem radical but it allows for the creation of a succession of spaces focused both on religious symbolism and on the sensory experience..

One of his works, the Water Temple, is located the middle of a bamboo forest, paddy fields, and mountains. First we come across a polished concrete barrier, three meters high, that protects the entrance to the temple. Once past this barrier, we reach the lotus pool,with a discreet and thin concrete border. This has strong symbolism in the Buddhist religion. It represents the purity of faith in Buddha which emerges from within the life of ordinary people and enables them to access Nirvana.

The path to the prayer hall passes through the center of the pool via a staircase and takes the visitor, or devotee, on a stroll through architecture before arriving at a Buddha bathed in natural light. 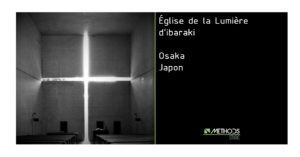 The Church of Light in Osaka

Another spiritual work by Tadao Ando, the Church of the Light in Osaka, built in 1988, was designed to replace the existing wooden church.

Because of the very small budget, the design was limited to a no-frills building, just the essentials: a floor, walls, a ceiling, and openings to let in light. The church consists of two spaces made of rectangular concrete blocks. It is made up of a 6m x 6m x 18m parallelepiped crossed by a slanting wall which energizes the space.

The building abandoned all ornament in favor of spirituality coming from the light piercing through the openings, notably the most iconic one created by a cross in a wall. Further proof of the tiny construction budget is in the pews which are made from pieces of scaffolding painted black.They emphasis the austere and minimalist aspect of the church. 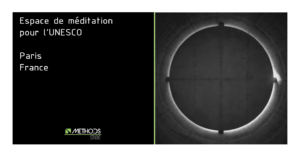 In 1995 UNESCO’s headquarters in Paris invited designs to mark the 50th anniversary of the institution and Tadao Ando’s proposal was selected. He created a Meditation space to allow everyone to pray for peace. Made up of a cylindrical area, 6 meters in diameter and height, the interior may at first appear austere as the walls and ceiling are made of bare concrete. But as with the church in Osaka, light gradually inhabits the place. It comes from the sky, from a bleeding between the walls of the cylinder and the roof, and suggests solitude and spiritual freedom.

From a childhood in working-class neighborhoods to international recognition 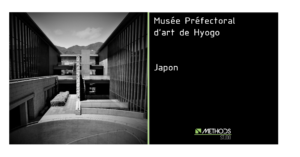 Born on September 13, 1941, in a working-class district in Osaka, Tadao Ando would train himself in architecture through taking odd jobs and reading. He was particularly inspired by the work of Le Corbusier, whom he discovered while a professional boxer. His career in the ring earned him enough money to travel to Europe and the United StatesArriving in Europe in 1965, a few days after the death of Le Corbusier, Tadao Ando visited some of his works, in particular the Villa Savoye which at this time was in ruins.

Strictly speaking, Tadao Ando started his career as an architect strictly speaking in 1970, where he built his first housesin Osaka as the city entered a decade in which the population would surge. He swam against the current of functionalist constructions and repetitive plans. 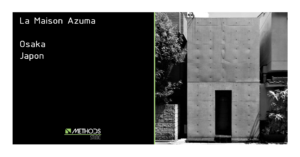 When Ando designed the Azuma House, his goal was to protect its inhabitants from the hustle and bustle outside. This earned him the Japanese Architectural Association Prize in 1976. This house, with its visible concrete wall,would form the base of his most representative architectural technique. the most representative.

As his renown as an architect grew, Ando went on to receive numerous international awards, including the Alvar Aalto Medal for his contribution to architecture in 1985. In 1995 he earned the Pritzker Prize in the aftermath of the Kobe earthquake.  This natural disaster, which affected his native region, was particularly deadly because certain 1970s constructions had ignored the basic rules of architecture. Ando donated his prize money to the orphans of the stricken city.

Alongside his cultural works, Ando has been involved in numerous urban planning and architectural projects for rebuilding cities hit by the earthquake.

Find out more about Tadao Ando

The Methods Studio team,
Only when you are satisfied is our job done

Insurance in construction with the participation of PASCAL BOUCLIER